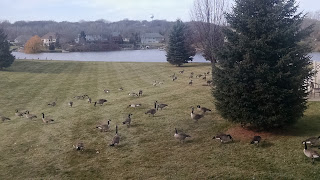 It's geese migration time in Rochester (thank goodness!) and as we went for a family walk last Sunday, there were hundreds of geese flying over us. They were all flying southwest, except one. One goose was flying in the opposite direction of the migration.

I pointed this goose out to Jane and asked her, "Why do you think that goose is flying the other way?" I gave a few of my own guesses, "Maybe he forgot his lunch. Maybe he's going back for his family. Maybe he got lost." Then I asked Jane for her hypothesis, but she wouldn't play along. Instead she simply stated, "I don't know. I'm not that goose!"


With people as with geese, we can never truly understand why someone does something if we are not them. Even metaphorically walking a mile in another's shoes is not enough to truly understand a person. It may give some insight and empathy, and is certainly worthwhile, but without living an entire lifetime in someone else's mind and heart, we really cannot fully understand their motives and purposes.

But we don't need to.

It seemed silly and irrational that a goose was flying the "wrong" direction, but I'm sure he had a good reason for doing so. And knowing that is enough. I can just keep going in my direction and let him keep going in his, knowing we both have our reasons.

When I see others in life flying the "wrong" way, saying the "wrong" things, making the "wrong" choices, too often I think that by observing their actions I can also draw conclusions about their motives and their hearts. But I can't. And I don't need to.

We all have flawed motives and imperfect hearts, and there certainly are absolute rights and wrongs in the world. It is fine and even good to judge actions and stand firmly by eternal principles. For example, immorality is wrong. Abuse is wrong. Marriage between a man and woman is right. Prayer is right. And in those cases, I hope we will firmly show the right way and help others find it as well.

All things considered, I really believe that most people are doing the very best they can and even if they're doing things the "wrong" way, they have a good reason for doing so.

So, the next time I see someone flying the "wrong" way, I hope I can simply say, "I don't know why. I'm not that goose."
Posted by Lisa Teixeira at 9:20 AM No comments: 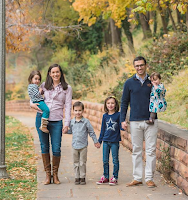 Hi, I'm Lisa. My husband Miguel and I have four awesome kids, Jane (7), Steven (5), Annie (3), and Kate (1). We live in Minnesota while Miguel finishes his medical residency. I taught high school math, but now I'm full-time Mom, part-time writer and editor, and part-time volunteer coordinator for our local refugee resettlement organization. We are members of The Church of Jesus Christ of Latter-day Saints and our faith brings us happiness and unity through this exciting, challenging time of our lives. These are some of the lessons I'm learning about God along this journey of motherhood.